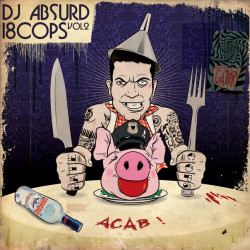 Not long after the first volume , this second wax from Absurd on the Kiosk Records imprint delivers the right dose of energetic groundshaking Dubstep for the Bass afficionados .

The A-side track "L.Year" ( do we see a certain taste for dumb wordplays here ?) will take you on a back to the future trip : while its hiphopish drum pattern embraces an heavy guitar riff wich will remind you of some of the finest 90s Fusion , its frantic and almost manic wobble part will defintaley will displace your body soul into the future ! Gettin reloads & crowd massive reaction everytime its been played so far , we could say without much risk of being wrong that its definately a tune you'd want for the hype time of your Dubstep set.

On the B-side "Crazy Wasteman" has been getting a few names & words back from dj's & ravers that speak for theirselves : "piratestep" ,"frenchstep","gipsystep" etc.. Basically the tune sounds like if you mix typical continental/eastern europe accordion swagger with a dubby flavour with some of the sickest drops.

"Kiss" , despites its name has nothing to do with any sort of girly/ nice material , the vocal gimmick of the tracks shows again Absurd's love for childish provocation & 2nd degree jokes while the tune's general mood & drops wont left no Bass Raver disappointed .

Of course as on the first volume of the i8cops serie , the artwork is on the same twisted humour note & wont leave no heads not turning back thanks to the ever improving Larry Print.